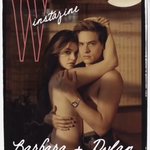 They should be nauseating. There they are, Dylan Sprouse and Barbara Palvin, two of the world’s most genetically blessed individuals, legs intertwined as they pose on a '70s shag rug. There they are, holding hands in matching bathrobes between shots. These two literally refuse to lose touch with each other. And yet, somehow, it’s actually pretty damn cute.

For all their PDA, online and IRL, there’s still a sense of mystery to Dylan, the 26-year-old former child actor turned adult actor and mead entrepreneur, and Barbara, the 25-year-old model who has been one of the most in-demand faces in the world for nearly a decade, as a couple. There are still many specifics unanswered. Most essentially: How did they even meet? Well, as far as love stories go, it’s a modern classic: Boy meets girl at a party. Girl follows boy on Instagram. Boy slides into those DMs.

“He slid into my DMs,” Palvin confirms, situated on a couch somewhere in Staten Island, New York, where the pair have just wrapped their first photo shoot together. “She followed me, so I was like, I guess I’ll give her something. And I slid into her DMs,” Sprouse says. “I was like, ‘Hey, I don’t know if you’re in New York for very long, but we should hang out if you want to. Here’s my number.’ And she didn’t message me for six months.”

Now eight months into their courtship, the pair have their routine down. “I took my time,” Palvin explains. “I knew I wasn’t in a good mind-set at the time, and maybe deep inside I knew that it could be something more." She looks at Sprouse. "Now, say your part.”

He's ready for his cue. “I’m not one to chase,” he says. "If I get left on read after putting out my number, fuck that. I’m crying internally, but outwardly…. So I ended up booking a movie and going to China for a six-month shoot. My manager was with me and asked, ‘Dylan, is there anything you wish you had wrapped up before you left?’ And number one, I wish I was there for the opening of my brewery. And for the first time in six months, Barbara popped in my head, and I thought, I wish I had time to take this girl on a date. Ten minutes later, Barbara texts me for the first time in six months.”
From there, well, here’s the Cliff Notes: Palvin thought she had a job in China. It got canceled. She went to China anyway. The rest is Instagram history. “There’s a little language barrier for me, so I was never good with texting or flirting,” Palvin, who is Hungarian, says now. “With Dylan, everything seemed so easy. We had the same interests, and jokes were hitting at the right spot, and he didn’t think I was disgusting or anything.”

Again, Sprouse has his punch line ready: “Well, not so fast on that last part.”

These two, right? So they have that going for them, a playful repartee (on shooting together for the first time, Sprouse says, “She’s not so bad to work with, actually,” to which Palvin replies, “Wish I could say the same about you”), and here comes another cute factor: They also happen to both be major anime fans. “We watch anime pretty much exclusively,” Palvin says, going on to name so many shared programs that it would be a challenge to readers’ attention spans to enumerate here.

“We’ve watched a few,” Sprouse deadpans after Palvin finishes listing them. “I was hiding it,” Palvin adds. “Well, not hiding it, but I wouldn’t start off a conversation with that. In high school, I had a friend who would watch Naruto with me, but that faded away. When [Dylan] came into my life, I was like, I’m home, baby.”
She has already taken Sprouse home to Hungary—twice—to meet her parents. “I wasn’t nervous to meet her parents, but the truth is that there is a language barrier, obviously,” Sprouse says. “Her mother speaks a very tiny bit [of English], and I am not proficient in Hungarian. I’m trying, but learning is definitely an overstatement.” Palvin adds, “I taught him the most important thing, which is if you go to Hungary and they offer you pálinka”—a traditional liquor that has been described as tasting like a slap in the face—”you say yes. And if they offer you sausage, you say yes. Then you don’t hurt any feelings.”

Family gatherings should be easier going forward. The very next morning, Sprouse and Palvin were moving in together, to an apartment in Brooklyn, which will double as Palvin’s first New York residence. And later that very day, she was flying off to Spain for a photo shoot.

Just like their relationship, their careers are also on the fast track. This year will see the release of the film Sprouse shot in China, Turandot, an action-fantasy flick for which he did three hours of martial arts training a day and learned to speak Mandarin. “[It was a] long shoot, and very, very difficult,” he says. “I’m super excited. It’s a really big movie with a lot of special effects, so that’s going to take a long time.” In addition to Turandot, he has three other films slated to be released this year.

And, somewhat famously, there’s also his brewery, All-Wise Meadery, which Sprouse opened in Williamsburg, Brooklyn, last year, and where he spends a good deal of his time now. “We just bottled our third batch, and now we’re in full swing to get our bar open,” he says. “Seeing people become regular customers, that for me has been the most exciting thing. It’s something that I’ve been brewing in my bathtub since I was 16 and finally took to this scale, and people are responding to it and it’s created a community of people. That’s very, very special.”

Palvin, too, probably deserves her own trophies. Last September, it was announced that she had been named a beauty ambassador for Giorgio Armani, and just days later it was revealed that she would be walking in the 2018 Victoria’s Secret Show for the first time since her debut in 2012. “It was stressful,” she says of the latter. “I didn’t walk for six years, and it was this big comeback so I felt a lot of pressure. But I think it had a very positive response to my body shape, so i want to keep up that message of body positivity.”

“It was obviously incredible,” Sprouse adds. “I saw all of the training leading up to it, which was very difficult, as you can imagine. Seeing her actually do it was a weight off of my chest as well.”

And then there was the meal delivery seen around the world: Sprouse arrived at the VS show with a bag full of Shake Shack, earning him Boyfriend of the Year status—and apparently, some free food, as well. “We’ve actually gotten quite a few food people reach out to us and give us stuff,” he says. “I’m going to be the new food guy on red carpets, just always bringing food. Check this out, we got a Dos Toros black card.” He pulls out his wallet to reveal a credit card that was, in fact, black and rather heavy. “Feel this shit,” he insists. “This is unlimited burritos.”

But surely one cannot exist on free burritos alone, so now that they are about to enter domestic bliss, who is the better cook? Here, the day’s first disagreement occurs.

“We actually both cook,” Sprouse says. “She’s better than me.”

“No, I just cook more,” Palvin shoots back. “But he’s better. I know how to cook with few ingredients and make it healthy, because that’s what I had to do for VS. But when he cooks, he uses everything yummy and unhealthy, so his always tastes better. I’m like, ‘Here’s broccoli and cauliflower soup made with water!’”

“You’re a better chef because you can work with things,” he replies. “I have to be by the book.”

A moment of silence; a détente has been reached. And so, Dylan and Barbara rise to say goodbye, hugging everyone on the crew. And there they go back off into the world, still arm in arm.