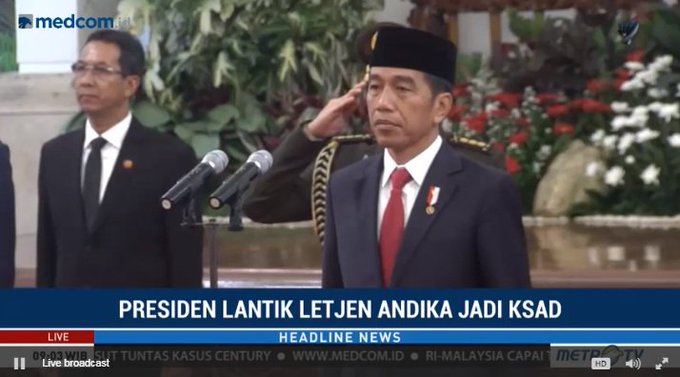 My colleagues @odydc and @ayaelectro identified Andika Perkasa as a, if not the only, strong contender for the KSAD position - as early as February 2018. Interesting to see how things unravel. CO18017 | TNI’s Reshuffle: Jokowi’s Strategic Move | RSIS rsis.edu.sg/rsis-publicati…

Gen Mulyono will retire in January 2019, the year of the presidential election; thus his successor might be appointed sometime this year to prepare for the upcoming election. Nevertheless, Lt Gen Agus is unlikely to succeed Gen Mulyono as KSAD because he too will be retiring, in August 2018. The appointment of Lt Gen Agus as Kostrad commander might therefore be a strategic move by ACM Hadi and President Joko (“Jokowi”) to buy time before finding the right person or probably, groom a trusted officer.

New Chief of Army on the Horizon?

Maj Gen Andika Perkasa is believed to be groomed for the position of KSAD in the near future. His career has soared under the Jokowi presidency due to his personal relationship with the Megawati confidant AM Hendropriyono. Aside from being a retired general himself, Mr Hendropriyono is also a trusted adviser of President Jokowi.

Maj Gen Andika is, interestingly, the son-in-law of retired general Hendropriyono. He came into prominence after his promotion as commander of the Presidential Security Detail (Paspampres) from 2014 to 2016. His credentials for this position were, however, questioned as he spent most of his military career studying overseas, thus lacking operational experience. His recent rotation as the head of Kodiklat AD also means that he has been promoted as lieutenant general, becoming the most senior officer among his cohort.

Maj Gen Andika’s accelerated promotion to KSAD could draw criticism within TNI AD circles and raise public concerns. The path from Kodiklat head to KSAD is not straightforward. But Gen Gatot and Gen Mulyono both served in Kodiklat AD as head and deputy respectively before rising to Kostrad commander and finally KSAD.

It looks like Andika Perkasa, current commander of Army Strategic Reserve Command (KOSTRAD), will be officially sworn in this morning as the new Army Chief of Staff m.detik.com/news/berita/d-… <THREAD>

When he first came back to Jakarta in January as Head of the Army Training and Education Command (KODIKLATAD), I predicted that he was likely to made Army Chief soon twitter.com/EvanLaksmana/s…

Six months later, as I suggested in January, Andika became KOSTRAD chief, which was traditionally one of the pathways to the Army Chief position. twitter.com/EvanLaksmana/s…

His political connections (he's son-in-law of Hendropriyono) and personal rapport with JKW aside (former presidential guard commander), AP is one of the brightest professional stars of his academy cohort class of 1987.

A long-time special forces guy, he has advanced civilian and military training in the US. Had key operational, research, education, and political postings checked throughout his career, which some deemed "unusual" 👉 indoprogress.com/2014/11/andika… (Indonesian)

With AP as Army Chief, Jokowi could finally have most of "his own men" as TNI leaders. TNI Commander Hadi Tjahjanto took about a year to finally replace all 3 service chiefs. The intra-military dynamics, I've been told, have not been easy plagued w resistance and uncertainty.

In any case, coming into an election year, I hope there is a stronger unity across the coercive arms of the state, from police to military, now that every one should be on the same page. The upcoming election may still be filled spoilers using remnants of the coercive network.

I think it's unfortunate that TNI key leadership appointments are still subject to "political dynamics", rather than an institutionalized, transparent, and merit-based system, but such as the reality of post-Suharto civil-military relations. Dance with the devil you know? <END>